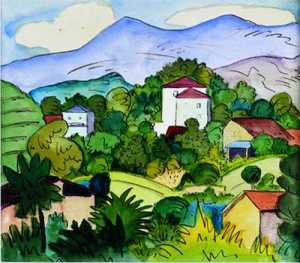 Hermann Hesse’s painting has long been neglected and remains little known, although recent exhibitions have raised awareness of his visual expression.  In 2008 (5-24 February) an exhibition at Maison Heinrich Heine in Paris, “Hermann Hesse- Leben und Werk im Uberblick” offered photographs, watercolours, quotes and poems rarely before seen.  This was followed in 2012 by an exhibition at the Kunstmuseum, Bern, Switzerland, where Hesse had lived for many years, experiencing an oscillation between a harmonious existence and severe anxiety attacks.  The publicity statement said:

Hesse did not see himself as an author or painter and instead considered himself an artist. His comprehensive notions of art kept the dividing line between the various arts fluid. As a poet Hesse was long seen to be a controversial figure despite the fact that he was given the Nobel Prize for Literature in 1947. Also as a painter Hesse had to wait a long time before art criticism no longer ignored him.

He worked only in watercolour – never a popular medium among art critics – and because of the lack of formal art training his “style” did not seem professional.  During the twentieth century, artists were mainly associated with one medium only: they were poets, or painters, or writers, or musicians.  But in the very early part of the twentieth century many of the best-known figures in Western creative arts worked across numerous mediums.  Photographers such as Man Ray worked with painters such as Marcel Duchamp and other artists (Rene Clair, Frances Picabia) to make some of the most striking early films.  Take a look at the 1924 film Entr’Acte.

Part of the outburst of creativity in the transition from pre-modern to modernist art-making grew from the refusal to accept pre-set boundaries about what kind of “work” people could do.  Looking at Hesse’s stylised and seemingly simple paintings, his respect for nature, and for a harmonious human place within it, moves us with its clarity, humility and directness.  Most of these paintings appeared alongside his gentle and sometimes deeply anxious poems, many of which remain untranslated into English.  The problem of home and identity moved him deeply. He loathed the certitude and comfort of the German middle-classes but found a sense of home in nature.  He travelled “friendly paths” to find it.

”One never reaches home, but wherever friendly paths intersect the whole world looks like home for a time.” 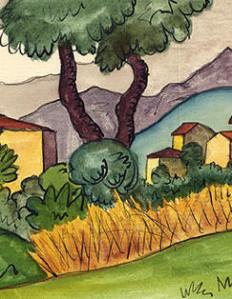 Unauthorized use and/or duplication of this material without express and written permission from this blog’s author is strictly prohibited. Excerpts and links may be used, provided that full and clear credit is given to Annette Hamilton with appropriate and specific direction to the original content. Images on this site are reproduced from public sources/ by permission and are for research and educational purposes only.
Join 19 other subscribers
Loading Comments...
%d bloggers like this: