This touring survey exhibition, curated by Gavin Wilson, offers 35 paintings and drawings from Jason Benjamin’s recent work. The media release “talks up” this selection as a re-affirmation of a landscape tradition “at the heart of the Australian experience”. Edmund Capon, in the catalogue introduction to the show, speaks of scale and the infinity of time and space in the work. The collection suggests an intense feeling of being alone with the earth, an entry into the space of a particular form of nature, spare and haunting, a poetic reverie said to be saturated in poetry and beauty. 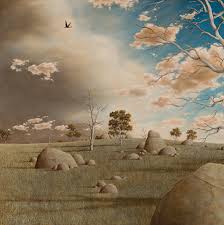 The exhibition is moving around several large NSW centres including Cowra, Wagga, Bathurst and Katoomba. The arrangements for such a touring show must be complex and the motivation for an artist such as Benjamin to engage in the venture are not exactly evident. Certainly it is great for the rural NSW art-lovers, but there must be more to it than this.

Benjamin is a brilliant and unique artist. When I first saw some of his work exhibited in a Melbourne gallery a few years back I was astonished by the scale and technical ability of the works, far beyond anything which normally appears as “landscape” in the contemporary art scene. His work is realist, maybe at a brief glimpse hyperrealist, but underneath this superficial impression are layers of profound subtlety. Time and space are expanded and condensed. Horizons tremble, seemingly alive. Skies are overwhelming and absorbing. Details of rocks, leaves, grasses and trees are rendered with what almost seems like love. I thought at once: I want to buy one of these paintings. I had never heard of Benjamin and imagined his work would be at least affordable. Wrong. These large landscapes were selling for $30,000 and up, and almost all in this show had been sold.

Benjamin was born in Melbourne in 1971 and began exhibiting in 1989. At the age of 16 he received a scholarship to the Stony Brook School in New York for a diploma followed by work at the Pratt Institute in Brooklyn. He has won many local prizes in Sydney (Mosman Art Prize, Kings School Art Prize) and has had been a finalist in the Archibald in 2011, 2013 and 2014. He has also had solo shows in Tokyo, London, Hong Kong, Singapore and Rome. His work is far outside the conventional expectations of the contemporary art world. As Maurice O’Riordan commented in an Art Monthly piece in 2010/11, his work at first sight seems to be “acritical”, beautifully rendered but earnest and conventional. This impression was based on seeing jpegs of the images; once seen in the gallery or studio the full impact is a revelation. O’Riordan saw the exhibition Shelter at the Michael Reid gallery in Sydney (4 May – 5 June 2010) and noted the moody colour and obsessive detail, realising the importance of encountering the actual surface of the expansive oil-on-linen works. These were not works of mimesis, but evocations of emotion and psychology.

Benjamin’s career began with an encounter with Jackson Pollock’s abstract expressionist canvases in New York, very far from his current landscape work. The monograph on his work What Binds Us, 2007, goes through the various phases and genres of his work, including his portraits of Tony Abbott, Bill Hunter and others. Nevertheless, he is best known for his landscapes. 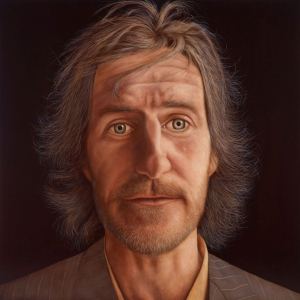 In 2008 Benjamin and his family were invited to stay at the station Burrabogie on the Hay Plains, from which the work in this show emerged. Benjamin considers that this experience resulted in a “drastic shift” in approach (p.11) It is not really clear what this shift consists of. Journey, centred on a huge, partly dead tree, offers a simple composition with an odd centredness. Poem, from the same year, is highly repetitive in structure, with a few dark birds scattered across the detailed sky. One of the most moving works is She’s Searching for You Too (2010). A gently curving road stretches across a rise into the far distance. A setting sun illuminates banks of clouds while the sky behind is a tremulous pale blue. In many works the semi-circular grey granite rocks look like sheep resting in a paddock. The large square composition, Can We Stay Here Forever (2012) again offers a very formal composition of rocks on finely detailed grass, with the same turbulent sky and scattered birds above. 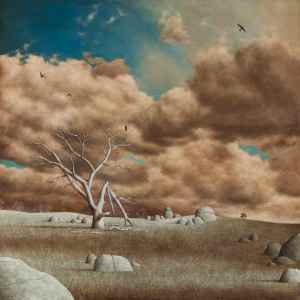 The material in the touring exhibition does not seem up to the quality of his best work.  His paintings are sometimes criticised for being picturesque or sentimental.  That is not the problem here.  Rather, there is something formulaic and perhaps casual about it. In part this may be the result of the smaller scale of the works, and perhaps the scope of the palette. The introductory interview by Gavin Wilson offers many insights into his thought process in depicting the granite boulders and shifting skies, the sense of elation and foreboding found in the place. The dead tree limbs set up the compositions. Benjamin has studied Chinese and Japanese traditional art and philosophy, which seems to provide inspiration and interpretation especially through the concept of the Zen garden.  The idea is great, but sometimes the execution seems to lack immediacy, the sense of rapidity which underlines Zen/Chang art.

The works on paper are beautiful and extremely elegant. I particularly liked the heads of birds: kookaburras, parrots and owls, rendered in exquisite detail. I have never seen Benjamin’s drawings before so this was a particular pleasure. 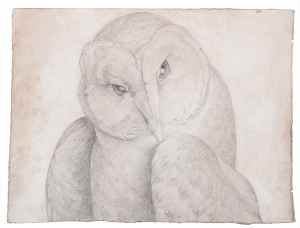 Overall though, in spite of the curator’s efforts to affirm some kind of transcendental significance to this show, it is not at all apparent why we are seeing in his recent art a “gradual transformation of the physical into the metaphysical” (p. 10, Catalogue publication). Or, at least, it is unclear how this show in particular demonstrates this more than his earlier landscape works. On the wall these paintings look far less powerful. There is a blankness to the earth, and a kind of hysteria in the heavens. Somehow the fascinating balance of the Monaro and high plains landscape seems to be just missed here. One hardly dares to suggest it, but what might be needed is a genuinely new approach, one which moves away from the well-established and recognizable Benjamin “style” and leads the viewer to stop, and ask: who is this painter? Whether a change of landscape subject in itself is sufficient to provoke this, or whether some very different grasp of the issues in perception and representation might be called for, is an open question. However, the current tendency, or insistence, on the “signature” of the individual artist in the works may be reaching its limits in Australian landscape painting today, and Jason Benjamin may be the first in line to suffer for it.

Unauthorized use and/or duplication of this material without express and written permission from this blog’s author is strictly prohibited. Excerpts and links may be used, provided that full and clear credit is given to Annette Hamilton with appropriate and specific direction to the original content. Images on this site are reproduced from public sources/ by permission and are for research and educational purposes only.
Loading Comments...
%d bloggers like this: