Reading a lot about the animal mind at the moment – an excellent book by Virginia Morell, Animal Wise, published by Black Inc in 2013 talks about recent scientific research which is, very slowly, beginning to realise that animals do in fact have “minds” – and I came across some remarks about bower-birds which add the imprimatur of science to the claim that they are making art.

Scientists studying the greater bowerbirds mapped and tabulated the thousands of stones, glass and other beautiful items of decoration the male birds use to ornament their bowers (as described in an earlier post) The Art of the Bower-Bird. One scientist wrote a code letter on each little stone and piece of glass, hundreds and thousands of them even just at one bower. What did she find?  The birds weren’t only collecting items of beauty to display to their lady loves, they were actually creating the illusion of perspective in the way they laid them out – the same techniques artists use for landscape painting.  The birds put the largest of their pieces furthest away from the opening to the nest and the smallest ones close to it. The female bowerbird inside the nest looking outwards will then perceive them as all being of around the same side.  Was this an accident? No of course not. When the researchers disrupted the birds’ careful curation, they found they restored them back to the original order once the researchers went away.  Each item had its proper place.  “Bowerbirds, the scientists concluded, are artists – the first animal, other than humans, that is fully recognised as having a artistic sense”.

Well I don’t know if that is the conclusion we need to come to. I think the painting primates demonstrate their artistic sense once they have learnt to paint properly, much as humans do. But the point is, that artistic sense, the aesthetic engagement, belongs in the interaction between mind and world, and there is no way we should ever have concluded that humans are alone in this.

In an earlier post (“What is Art? February 2015) I made some remarks about animal art. The issues around whether or not animals can make art are far from simple and very hard to research. It is as if the idea of animals being art-makers, or having an artistic sensibility, seems too silly for words to many people. If chimpanzees make drawings it’s because they have been rewarded for doing so by their human carers or otherwise manipulated. It just isn’t “natural”.

I find this very hard to accept. When you see talented chimp artists totally fascinated by their painting it’s hard to think they’re doing it for a dog biscuit or banana. And what about the creatures who go to a great deal of trouble to make art without any input from the human world? Jimmy the chimp artist at Rio de Janeiro zoo took up painting to get over his chronic depression. Animal rights activists have used his talent as a basis for obtaining his release from captivity, although so far the case has not succeeded in the courts.Jimmy the artist chimp has fame but not freedom

In recent times I have been feeling very close to birds. Spending a lot of time in the Blue Mountains west of Sydney, and on the Hawkesbury River, brings the bird- world very close. The range of species, the musicality of the bushland, the presence of tiny wrens and finches seen so rarely now in city gardens is a great reminder of the richness and expressiveness of the bird-world. And the amazing beauty of the birds themselves.

It is true that there are still many birds in Sydney but the range of species is limited compared to the luxuriant birdlife some years ago. All the same at our Sydney place which is just ten or so Ks from the CBD we have kookaburras, currawongs, Australian mynah birds, flocks of shrieking lorikeets and a regular visitor, a tawny frogmouth who sits on the back fence or the front railing uttering soft repetitive cooing sounds.

Just recently he and his partner have been raising an owlet in a ratty gumtree at the front of the house. He sits on the railing and stares into the house until we come out to greet him.During the day he rests against the trunk and dozes.

However this post has been prompted by a morning conversation about the Australian bower bird.* The Satin Bower Bird lives up and down the east coast. The adult male is black and glossy, the females and the younger birds are brownish-olive.

Many bower-birds live in the bush below the Mountain escarpments. The male is a consummate installation artist. He builds an elegant small bower for his lady to rest in and decorates the “floor” in front with a range of found objects in bright colours, an array of reflectivity, and a carefully designed layout. Blue is a favourite colour. I think he likes the blue because it reminds him of her lovely eyes.

In a documentary I recently watched, the gentleman bird spent hours re-arranging his objets d’art until he felt they were absolutely perfect. Then his lady visitor was ushered into the bower, where she sat quietly while he picked up a range of his favourite objects, showed them to her one by one, put them carefully back and then began an elegant and very moving dance. All this was of course prelude to their love-making which was very rapid indeed. It was the artistic part – the collection, the curation, and the ballet – which was the main point of the exercise, the foreplay if you like, while the mating itself was a kind of boring obligation to be completed as rapidly as possible.

Courtship dance of the satin bower-bird

Yes, I know, this is putting things round the wrong way at least from a David Attenborough point of view. But why should we think that the bowerbird is mainly interested in the sex? It looks to me that the art is far more compelling.

I have never come across a good discussion of the role of art and aesthetics in animal evolution – rarely enough is it even touched on for humans. But Art’s role in human evolution is a major theme for 2016 Dark MoFo at MONA in Hobart.  An earlier exhibition The Red Queen at MONA in 2013 expressed the core ideas which David Walsh, quirky arts patron, has long been interested in. Here’s a short ABC report. More to come on the 2016 program shortly.

Story on Art and Evolution at MONA 201

* warm thanks for the conversation, fellow artists Tina McCormack and Gloria McGrath. 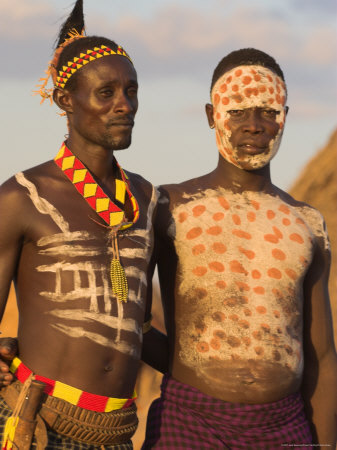 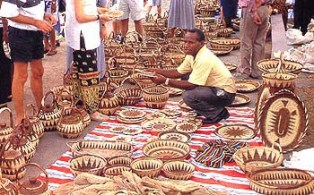 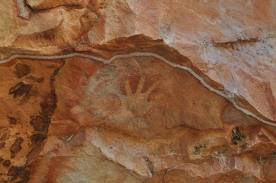 The making of marks and images is embedded in human life.  From the blown ochres outlining handprints on cave walls to the ceilings in Renaissance palaces to the production of every form of visual material in today’s world productivity seems never to have faltered. Some of the most extraordinary art is made using the human body itself as canvas. Before modernity, in hunter-gatherer/horticultural societies, the artistic impulse seems already to have reached its full potential.  Without modern technologies, artists (almost everyone) understood how to obtain natural sources of colour (ochres, pipeclay, charcoals, earths) and how to use different media to mix and fix them to the body, to walls and onto the ground.  Although designs were usually inherited and traditional there was always room for innovation.  This is art in its purest, cleanest sense.  It has no environmental negatives and links the natural and bodily worlds in the deepest way.

Is art-making exclusively human? Do animals make art?  There are some amazing examples, although they seem to be limited to very specific circumstances.  [accessed 7/2/14]

Art, its existence and practice, raises complex philosophical and psychological questions.  Freud and post-Freudian theorists have proposed theories about art and its meanings which are not widely known, let alone accepted, in the art world.  The political meaning and function of art has received more attention.  The changes in the significance and function of art in era of technological modernity (and near universal commercialisation) are closely related to this question, under the influence of Walter Benjamin and Theodor Adorno.  Many resist any attempts to traverse these fields and assess their implications.  Meta-theory is not necessary for the practice of art which always transcends philosophy.  But for anyone trying to practice art under contemporary conditions it can offer stimulus and insight.

One of the most fascinating aspects of the human commitment to art-making is how absolutely useless it is.  There is nothing to be gained from it in terms of the usual requirements for survival: it can’t be eaten, built with, or made to do anything other than to signify and please. Yet the desire for aesthetic pleasure seems embedded and the ability to respond to it seems part of the cognitive system.  Wherever it is possible to decorate something people will do it.  Making a basket to carry produce doesn’t require the intricate modes of weaving which so often appear, but there they are.  As soon as survival is assured and people can live somewhere above a bare subsistence, art-making appears.

Today’s systems of production mean that images are everywhere so nobody needs to feel obliged to make them in order to experience them.  Many feel they can take art or leave it.  But for others, it is something they are simply drawn to.  There are all kinds of art-making, some recognised and rewarded far more than others, but for art-makers one or more forms of expression seem to be pulling at the heart, or maybe the soul, with so much power that it can’t be resisted.

Art-making is a challenge as well as an intensely gripping activity.  I often feel the paintings I want to work on are actively demanding my attention, as if they already exist somewhere and are revealing themselves through me.  My ability to respond is limited by my inadequate technical understanding and lack of training.  Being able to make better art will meet the desires of my conscious, and unconscious, life process.

Unauthorized use and/or duplication of this material without express and written permission from this blog’s author is strictly prohibited. Excerpts and links may be used, provided that full and clear credit is given to Annette Hamilton with appropriate and specific direction to the original content. Images on this site are reproduced from public sources/ by permission and are for research and educational purposes only.
Join 19 other subscribers
Loading Comments...