Ryan Hoffmann is a young artist from Sydney’s National Art School, one among few to have been given a solo show in a reputable gallery while completing his Masters of Fine Arts degree.

There has been a buzz around Hoffmann for some time, and this show gives him an opportunity to demonstrate why. It doesn’t entirely succeed although the concept is great. But the “hang” and the lack of documentation are a problem. Most pictures in gallery shows exist in their own right, each with its unique qualities, capable of standing alone. Hoffman’s are part of a larger vision and the viewer needs to know more about how they relate to each other and we should care about them.

As pictures they are of varying quality. Overall they seem barely painted, more like gestures, although they look much stronger as photographs for example on the gallery website. The images are thrown together on varying supports, some very small. The smaller paintings are no better resolved than the larger ones, if anything they are even more random and sketchy.

The gallery wall is covered with what looks like cloth or paper or maybe paint in a vague wash of pastel colours. Most of the paintings are hung close together in what seems to be a random array, large and small, bright and monochrome, square and rectangular. A few of the larger paintings – the “hero” pieces- occupy spaces of their own and two of these are especially striking (more on this later). Art lovers like to see paintings in a show as separate entities, each existing in its own terms, able to be translated to a different space, for example to a wall at home or in an office. Diptychs or triptychs are fine, creating a single visual statement, but otherwise each painting is seen as its own entity. Are these images telling a story? Is there something we should know but haven’t been told? Well yes there is, and it is quite complicated.

Hoffman has exhibited these, or related, paintings in at least two previous shows.  While Artist in Residence at the Glasgow Art School earlier in 2015 he offered a similar show with more paintings, at least fifty.  Some of them, many in fact, are also being shown here.  The concept for the hang was the same: a single wall, a lot of pictures jammed up together in seemingly random order.

Later, in a show called RREALITY PROJECTIONS, part of the requirements for the MFA at Sydney’s National Art School, the same layout includes many of the same paintings. An exegesis accompanied the show, called “Readymade digital photographs: Virtual reality as autobiography”.

The show is engaged with digital photography, and is telling a kind of autobiographical story. This story can be told in many ways. No images take any particular priority, they can be arranged in any order. They are not art photography but the kind of images which everyone now shoots on their phone. If they bother downloading the images at all they can rearrange them in any order, make new “albums” from them, send them round the world in various forms, pin them on Pinterest, send them to their Instagram account. These seem to be paintings of casual snapshots on the digital device, to be treated in the same random way.

Earlier still a show called The Inter Galactic Image Factory at Liverpool Street brought together four of the NAS 2014 cohort including Hoffmann (with Seth Birchall, Mason Kimber and Conor O’Shea). Hoffmann’s paintings in this show are different to those in the later shows but clearly show the same impulse. An artist’s statement appears on Hoffmann’s website which explicitly connects his practice to the use of smart technologies and the Internet. While this statement is in a rather tortured form, it illuminates what this work is about.

Images are now simultaneously representing, existing and omnipresent as a form of “virtual reality”.
By regarding the digital image as a form of readymade imbued by its time, place, culture, Hoffmann’s practice investigates the potential for a new paradigm in painting which courts a contest between photographic representation and painterly application. Through the negation of linearity and hierarchy in subject, Hoffmann locates images in painting from this “virtual reality” to form an autobiography.

And so we see that, without explicit reference, Hoffmann is in Gerhard Richter territory, struggling with the same issues about reality, image, painting and autobiography, now in the digital age.

It would have benefited the Liverpool St show if something to this effect had been made available in the catalogue or on the wall. There is an argument against spoon-feeding the art public but in a case like this the “sense” of the work shifts into a radically new position when it becomes clear that we are looking at deliberate engagement with a specific problem in contemporary representation. There is a difficulty with work which lives on the border between commercial art practice and art theory: how to connect the results of such a practice with the conventions of the art-buying public. Around less than half of these works had been purchased in the first two weeks of the show. Some were the smallest works, barely sketches, priced very modestly. The others were the strongest and generally the most “stand-alone” pictures in the show, with the very strange exception of the main hero-piece, “Penumbra”, which in spite of its striking qualities and painterly aesthetic had not been snapped up.

By far the most effective works for me were those expressing the manifold possibilities of semi-monochrome. Small works such as Alpine Resort shine with hidden depths as, on the very small canvas lights beam out in pale reflection.

Some of the most interesting works feature grids and shadows on windows, or views through windows into empty spaces. In the relatively large-scale I forget where we were there is the sense of the sudden experience of light and dark which opens up to an unexpected which could be anywhere.

In the tiny very sketchy Passing the viewer looks out of a window at a building in a snowy landscape. Inside, there is a sense of enclosure or capture, but also a feeling of relief at being safely in an interior while the outer world is unknown.

One of the most effective pieces in the show is the graceful, well-balanced landscape Tracks. The eye moves between the snowy peak on the horizon and the network of traces proceeding from the viewer’s position into the distance. The trees form a kind of entryway into the mid-distance, where the traces disappear. The absence of human figures is contradicted by their presence, the landscape could not look like this had they not been there but now they are evacuated. The subtle colouration in this painting is picked up clearly in photographs although in bright sunlight on the gallery wall it is much harder to discern. 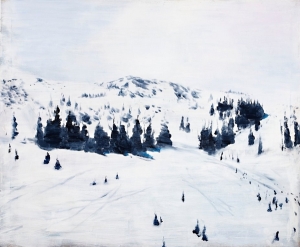 Among the numerous small pictures are several sketches which suggest the reality of a journey which could be universal, any airplane, any seat, any destination. The composition in Untitled is very powerful but on such a small scale and with so little depth on the canvas it is hard to feel engaged. If this was a painting on a much larger scale – one which emphasised the abstract aesthetics of these moments of everyday life – it would be extremely effective. As it is, it is easily overlooked.

Another striking image is offered in Sniper. In earlier work Hoffman clearly reflects on military themes. But this sniper might not be military. He (or at a pinch it could be a she) is sighting down the barrel at an unknown target: it could be people coming out of a picture theatre or some other expression of the random mayhem in the contemporary world. The thin vagueness of the paint and the limited use of tone and colour in this little picture makes it particularly effective. 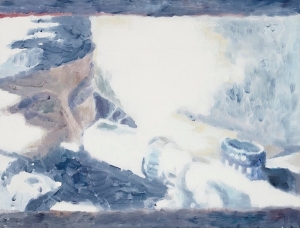 This brings us to the key issue of whether the conceptual qualities of this work can engage with the commercial market. The ideas behind the project are compelling, but the images need to be able to stand alone, unless of course someone chooses to purchase the entire suite of works, which would make best use of them. Many seem to be barely painted, which creates an interesting quality at one level but is not what the art buyer is accustomed to. Hoffmann has a lot of raw talent and strong presence on the wall but the work needs to be re-oriented or harnessed differently if it is to move forward into the fraught terrain of post-art school life.

Unauthorized use and/or duplication of this material without express and written permission from this blog’s author is strictly prohibited. Excerpts and links may be used, provided that full and clear credit is given to Annette Hamilton with appropriate and specific direction to the original content. Images on this site are reproduced from public sources/ by permission and are for research and educational purposes only.
Join 19 other subscribers
Loading Comments...
%d bloggers like this: